UK Retail and Exchequers Living Wage - What It All Means

With the Conservative regime budget of July 2015 came a new headache for retailers. The Chancellor of the Exchequer came with an announcement that those above the age of 25 will, beginning April 2016, start receiving a “Living Wage”. The Chancellor defined it as £7.20/hour in 2016 but expected to rise to around £9/hour in four years. The national minimum wage by 2015 stood at £6.50/hour, meaning that within the Living Wage's first year the employees receiving the lowest pay rate would see a wage increase of 10.8 percent. In contrast with the minimum wage of 2015, the government had indicated its decision that by 2020 those over 25 years of age should see a 38.5 percent increase in their pay. 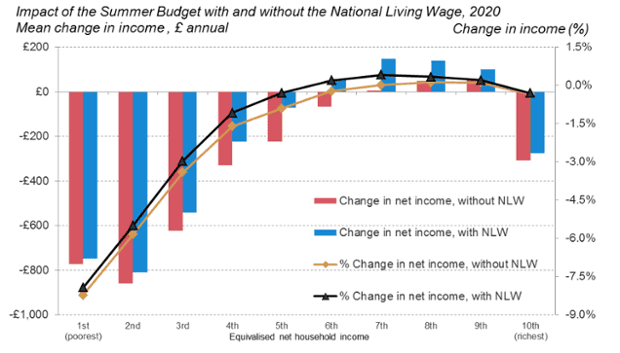 Of course the idea of enhancing the standards of living of people by better pay is always welcome. The 2016 first increment might not have a huge effect across the retail world and those below the age of 25 years will not be benefiting from the rise just yet and would be taking home the minimum wage as before. However, as years go by the introduced Living Wage is expected to have all manner of unintended repercussions, especially across the retail sector in remuneration, staff hours, job numbers and numbers of stores. Essentially, the Living Wage comes with consequences for retail stores, including national insurance and pension payments.

The retail sector employs around 3 million workers with a good number on short term kind of contracts and others part-time. All are paid the minimum wage and in some instances something a little bit more. Nonetheless, in 2015 the average median hourly pay rate in retail stood at £7.30/hour, meaning that a significant number of workers in retail are actually taking home more than the national minimum wage. This group hasn't been affected by the announcement.

Those above the age of 25 working in retail are a third of the entire working population in the retail sector. It means a good number of workers in this sector are very young to really enjoy the introduced living wage. Most of them work in fashion, discount stores and supermarkets.

Across the UK mostly in retail, lots of workers who’re poorly paid get welfare benefits courtesy of the government to boost their income and to be able to pay their taxes as required by the state. With the new Budget, the Chancellor of the Exchequer seeks to cut payments directed to welfare. During the 2015 Budget, the Chancellor has clearly indicated that with the new Living Wage it'll be clear that work does pay and that people can live off their work and not from government subsidies.

To boost businesses, the Chancellor had the Corporate Tax reduced to 19 percent from 20 percent starting 2017 and 18 percent by 2020. This would have reduced the tax that retailers pay. However, for retailers will very little profit or making very little, enjoying the benefits of a reduced tax wouldn’t be possible.

This includes those industries where price wars are already affecting profits like the grocery industry. If these sectors require an increase in employees then the Living Wage would really affect them negatively. In fact, the Budget Statement of 2015 actually indicates that the government is alive to the fact that the introduced Living Wage will raise the costs of various businesses.

Essentially, the actual Living Wage as calculated by the Centre for Research in Social Policy of Loughborough University is set as per the cost of living indicators although it lacks legal backing. While it lacks legal authority it shows the actual minimum a person required to live without debt across the United Kingdom. The Social Policy's calculated Living Wage for 2015 stands at £7.85/hour across the nation and around £9.15/hour in London. Of course, the Living Wage is really above what the Chancellor proposed in his Living Wage, who didn't indicate or recommend a higher allowance in the English capital.

According to the Office for Budget Authority, the estimate of jobs to be lost in virtually all the sectors in the entire economy is about 60,000. Nonetheless, the authority has claimed the Living Wage is not very easy to forecast. This means that the impact will be far reaching in various ways.

Firstly, it means the price will increase as a retailer is obliged to increase the pay rates. With a rise in labour costs retailers have no choice but pass the cost to customers by increasing prices. While passing the cost to consumers will happen it'll not be possible in all the sectors and areas of the economy. Thus, the cost of doing business for retailers will go up to around £3,260.48 million by 2020-2021.

Labour will have to reduce as less staff will be employed as retailers end up cutting the hours staff are used to and refusing to replace those members of staff who’ve left.  At the same time, delivery charges to homes will go up and free deliveries will only be possible to big purchases and high value checkouts.

The numbers of stores is also expected to go down by 14,000 in 2020 as the cost of labour would have accelerated the fall. In addition, customers will probably see lots of new technology in retail as self-scanning and self-service technology will be used more, replacing human capital